WROCC member and artist Richard Ashbery gave a demonstration on the use of the ArtWorks 2 vector graphics package. He took us through a complete worked example, creating a colourful butterfly in front of our eyes. Richard’s demonstration demystified a number of the more ‘advanced’ tools in ArtWorks, including a surprising and effective use for envelopes. The evening should have provided inspiration to all users of vector graphics software, whatever their level of experience.

Richard Ashbery had planned to give his demo of ArtWorks 2 at the October meeting, but very obligingly brought it forward when it became apparent that Gavin Crawford was not going to be able to give his talk in September after all.

ArtWorks 2, as the name suggests, is a development by Martin Würthner (the dapper little smiling German gentleman with the velvet jacket and bow tie) of the original ArtWorks program produced by Computer Concepts. Incidentally, CC also produced a version for Windows, using the brand name Xara. For a time this was marketed by Corel as CorelXara, and then it went through various incarnations, and the present version is called Xara Xtreme, which is what I use. You can even get a discount off the purchase price if you have a registered copy of CC ArtWorks. It is able to import both RISC OS drawfiles and ArtWorks EPS files, with some quirks and minor limitations, and can export in ArtWorks EPS format. This was put to good use during the preparation of the artwork for the 2007 show. However, I digress...

Rather than demonstrate each tool in isolation, Richard adopted a different approach. What he did was to draw something – an insect as it happens – and in so doing, he was able to show how a number of the tools could be used to achieve this. Having had some unpleasant real-world insect experiences lately (involving horse flies and wasps) I must admit that I shuddered when Richard starting using words like ‘insect’ and ‘thorax’. Thank goodness he never mentioned ‘mandibles’ or ‘sting’!

First, he drew a thin vertical line down the centre of the page, to act as a reference. He then drew a curved line, using the Curve tool (known as the Shape Editor tool in Xara) to form the shape of the left-hand half of the insect body, against the vertical line. Some fine tuning was done by moving the individual ‘control points’ on the line (known as ‘point handles’ in Xara) and by moving the ‘control handles’ (known as ‘curve handles’ in Xara) to alter the sharpness and direction of the curvature of the line either side of the points. Once he was happy with the shape of the line, he cloned it (Ctrl-K) to make an exact copy, and then reflected it horizontally to form a mirror image. This was then shifted to the right until the top and bottom ends of the two body halves more or less met at the vertical reference line, and the full symmetrical body was produced. Although Richard had selected a fill colour (black), the body was still just an outline as the end points of the two body halves were close but not actually joined. By magnifying those parts of the page in turn, and dragging the end point of one body half exactly over the other so that they ‘snapped’ together, first the top and then the bottom, the two halves became a single ‘shape’ and the fill colour duly appeared.

Constructing the insect’s body, showing the mirrored line for the body and the head

To give the body some texture and detail, Richard then drew a long, thin vertical oval along the top of the body, with a graduated fill ranging from light brown to light green – typical insect colours. He added a head by drawing a circle, and then turned it into an editable ‘shape’ so that he could flatten off the part that joined onto the body. He also produced a similar but thinner shape, with the same graduated fill, and placed it along the centre of the head, but overlapping the front of the body slightly. He drew a feeler (antenna) on one side of the head, and then cloned and reflected to make one for the other side. The eye was formed in a similar way to the head, and then cloned and reflected to make the other. (The eye was black, with a white highlight shaped in the same way as the eye itself). I suppose that Richard could have added the eye and the feeler to the left-hand side of the body before he cloned and reflected it, thus saving some work, but the repetition did help to get the idea home to the audience.

Converting objects into shapes and altering their control points

I was fully expecting Richard to draw a set of legs, thus producing a creepy-crawlie (another shudder) but instead he started to draw some wings. He drew two squares, one immediately above and adjoining the other, with a yellow-to-orange graduated fill. He drew three equally spaced thin black horizontal lines on each wing, and after drawing three lines radiating out from a centre point and joining them to make one shape, he cloned it many times and fitted the shapes between the horizontal lines to give the impression of a network of veins. The end points of each shape were individually ‘tweaked’ in-situ to randomise the pattern of veins to some extent. He added a couple of round spots on the upper wing, with radial fills (known as circular fills in Xara) of the same colours as the wings themselves, and the result looked very nice but rather geometric – what kind of insect has two sets of square wings? The next bit was impressive. Richard used the Envelope tool (the Mould tool in Xara), and with remarkably few movements of the mouse, pulled the wings into the clearly recognizable forewing and hindwing of a beautiful and much loved insect – no more shudders for me!

The wings were grouped, cloned, reflected, and grouped again, to form both wing sets. The wings were then dragged over to the body and placed underneath, and suddenly we had a very good, albeit stylised, butterfly. The ‘veins’ and the spots on the wings had deformed when the Envelope tool was used, giving a very good impression of the real thing. I thought that this was really quite impressive, and judging from the murmur of approval that went round the room, I’d say that everyone else thought so, too. 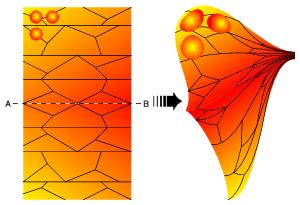 The wing sections for one wing, as they were initially drawn and after the use of the Envelope tool

Richard’s approach of taking us through a little project from start to finish was refreshing and effective. Of course, he didn’t demonstrate all of the tools by any means, but I think that this is no bad thing – sometimes, less is more. Apart from the fact that the Mould tool in Xara seems to work somewhat differently from the Envelope tool in ArtWorks 2 (though the same end can be achieved) all the processes and tools demonstrated by Richard were pretty much identical between the two packages. I have hardly used the Mould tool until now, but Richard has certainly opened up my eyes to the possibilities. 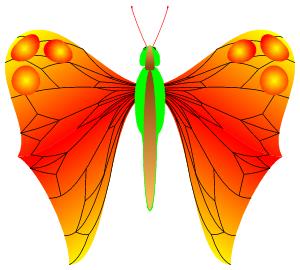 The finished – and unthreatening – insect

I particularly enjoyed the fact that this was essentially a cross-application and cross-platform demonstration. Although a specific application was being used on a specific platform, it should be possible to carry out pretty much the same processes in a number of other comprehensive vector art packages. CorelDraw and Adobe/Macromedia Fireworks for Windows spring immediately to mind, and also the late-lamented Vantage for RISC OS, though I have never used any of them in anger myself.