RISC OS is a British computer operating system, which provides an alternative to the more familiar mainstream systems such as Windows, Mac OS and Linux. Originally developed in Cambridge during the 1980s by Acorn Computers, it first ran on the ARM-based Archimedes range of desktop computers.

These days, RISC OS continues to run natively on a number of ARM-based computers, as well as being available to users of Windows, Mac OS X and Linux through emulation.

The main strengths of RISC OS are its flexibility and ease of use, which still make it an extremely productive system for many tasks. You can find out more about what makes RISC OS different in our introduction to RISC OS for the uninitiated.

RISC OS 5 is Open Source; owned by RISC OS Developments Ltd and licenced under the Apache Licence. Development of the OS is primarily looked after by RISC OS Open Ltd, who coordinate the work of the many companies and individuals writing code for the system. This version of the OS runs on modern hardware including the Raspberry Pi, as well as emulators running on the Windows, Mac OS and Linux platforms. It can trace its origin back to RISC OS 3.8 – the final version of the OS developed by Acorn in the late 1990s.

An alternative branch of the OS – RISC OS Six – was developed from a similar origin via RISC OS 4 by a company called RISCOS Ltd. These days it is looked after by 3QD Developments, but hasn’t seen updates in a number of years.

Which system to use is largely dictated by the hardware available: RISC OS 5 runs on modern off-the-shelf boards like the Raspberry Pi, as well as older development boards such as the BeagleBoard, PandaBoard and Wandboard. It can also run on custom designed motherboards including Elesar’s Titanium and the older Iyonix PC. RISC OS 4 and Six, on the other hand, mainly run under emulation, or on older hardware released in the 1990s and 2000s – such as the RiscPC, RiscStation, Microdigital Omega, and A9home.

More information about the way that RISC OS has developed, and an explanation of the current versions, can be found in our guide to RISC OS versions and our brief history of RISC OS. 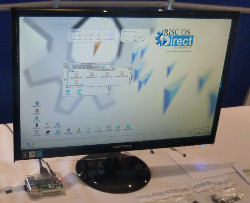 RISC OS requires hardware based on an ARM processor, although it can also be used on systems running Windows or Mac OS X with the help of an emulator. The latter option gives all the benefits of RISC OS, along with the ability to use the underlying system when appropriate.

Modern native hardware solutions run RISC OS 5 and are often based on the Raspberry Pi or PineBook. A custom-designed motherboard is available in the form of Elesar’s Titanium, whilst most other solutions are built around a number of development boards and sold by companies such as CJE Micro’s and R-Comp. Older hardware is also available, including the Iyonix PC – the first system to use RISC OS 5.

Emulated systems are either based around RPCEmu, which is available to run on Windows, Mac OS and Linux, or Virtual Acorn for Windows (and older versions of Mac OS).

You can find out more about the various systems that run RISC OS in our guide to RISC OS hardware.

RISC OS has an active community, with a number of local user groups (including ourselves), print magazines, websites and online forums.

For more information, www.riscos.info provides a Wiki-based overview of the platform along with information for users and developers. The RISC OS Open site contains developer documentation and an active forum with areas for both users and developers of the RISC OS 5 branch of the OS. News sites, including RISCOSitory and The Icon Bar, provide details of developments, and for those with access to Usenet, there’s still an active community within the comp.sys.acorn hierarchy.

If you want to know more, why not just contact us?