WROCC members receive a copy of our monthly newsletter, The WROCC. Produced in A5 format, it contains articles on RISC OS and its software, hints and tips, information about the subjects covered in our meetings, and much more.

Copies are produced in PDF format: members can download them from the this page, or have copies emailed to their inbox as soon as they are published. In addition to a ‘one page per A5 sheet’ version, a ‘two-up on A4’ version of each issue is available to help those who prefer to print their copies out for reading.

If you’re not a member but would like to see what you’re missing, a selection of older issues are free to download further down the page. 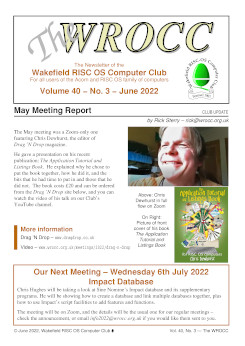 The June 2022 issue focuses on the 2022 Wakefield Acorn & RISC OS Show – the one which wasn’t in Wakefield. There’s a full show report, plus photos from the event and updates on the Prize Draw winners and the results of the Charity Stall. We also take a quick look back at Chris Dewhurts’s virtual visit to the Club in May. 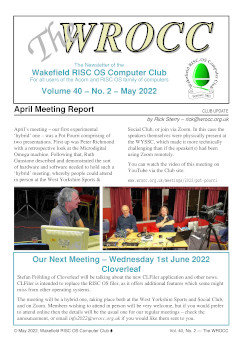 In May 2022 we take a look at setting up CloudFS to store a member’s data on pCloud, and how to configure a RISC OS machine to use a fixed IP address on its network. One of our members takes a trip down memory lane, with a look through a computer magazine from 20 years ago and an investigation into the effect of adding faster RAM to a RiscStation 7500. We review the hardware used at the Club’s first ‘hybrid’ meeting in April, and issue a programming challenge to our members. 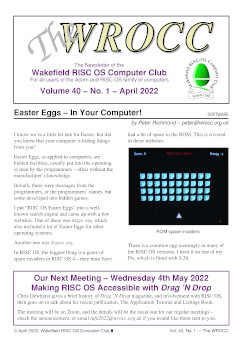 In the April 2022 issue our new Chairman introduces himself following the AGM and takes a look at how Easter Eggs might be hidden in your operating system. There’s a review of the updated Impression User Manual, and a look at how to create variable width, elliptical arrows in ArtWorks. On the hardware front, one member reports on how he upgraded his ARMbook to boot from the internal eMMC, another looks back at six years of using an SSD in a desktop computer, and there’s an alternative take on the UK’s move towards digital telephony. 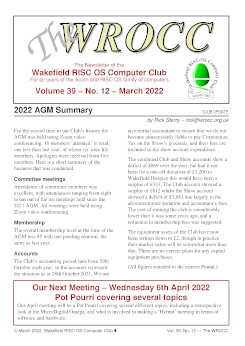 The March 2022 issue comprehensively busts five myths about the abilities of RISC OS and its software, and investigates the use of UpdCaCert for keeping SSL certificates up to date. One of our members takes a look at the evolution of telephones dial-up and broadband over the past half-centuary or so, and considers where things might be going in the future. We report on February’s Annual General Meeting, and reveal the winners of the Contributor Awards for 2021. 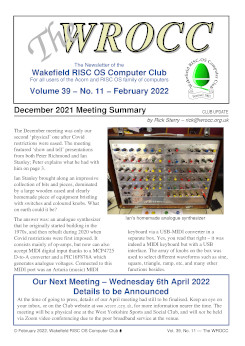 In February 2022 we take a look back at December’s meeting, where one member had RISC OS on a Raspberry Pi interfacing with some old-school hardware synths while another looked at retro PD on a RiscPC. Chris Hall muses on how to measure areas using drawfiles, sprites and BASIC, there’s a quick tour of Game of Life, and a correspondent reminds us of the power of TopModel.

An index of the articles found between issues 6.1 and 38.12 of the newsletter has been produced by John Arthur and Kev Smith, and can be downloaded here as a PDF document. Volume 6 coincided with the release of RISC OS, and prior to that the newsletter was mainly short hints and tips.

The Wakefield Back Catalogue 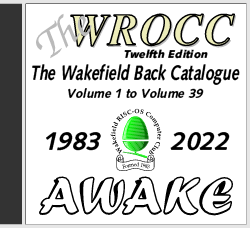 Relaunched following the completion of Volume 38 of The WROCC in April 2021, the eleventh edition of The Wakefield Back Catalogue contains PDF copies of the Club’s monthly newsletters going from The WROCC and Awake right back to the very first “hints & tips” sheet handed out at the April 1983 meeting.

The new compilation contains around 420 issues and is available as a download in these more ‘virtual’ times. It costs £7.50 for non-members, whilst members can buy it for the discounted price of £5.00. To order your copies, complete the Order Form and send it back to us. Contact us if you have any questions.

The WROCC Guide to Networking

Starting in late 2009, the Club has been publishing a series of articles on networking in the newsletter. Two years on, we’ve turned them into a stand-alone guide to the subject of networking RISC OS systems.

Each part of the guide is available in a 20 page A5 printed booklet for £3.00 including P&P, or in PDF form for £1.50. To order your copies, complete the Order Form and send it back to us. Contact us if you have any questions. 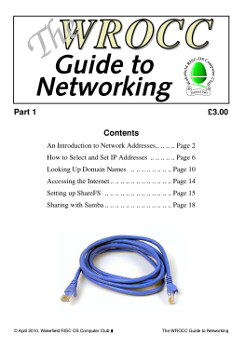 The WROCC Guide to Networking (Part 1)

By April 2010 there had been enough articles published to create the first 20 page A5 booklet; launched at the 2010 Wakefield Show, this covers the basics of setting up a network that contains RISC OS machines and is available for purchase to members and non-members alike.

The guide introduces us to networking and how to configure IP addresses on a home network, as well as how to make sure that DNS is working correctly. We look at sharing an internet connection, configuring ShareFS and using Samba to view RISC OS files on Windows. 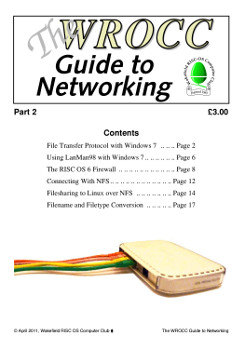 The WROCC Guide to Networking (Part 2)

Launched in April 2011 at the Wakefield Show, Part 2 of the WROCC Guide to Networking continues where Part 1 left off and looks at file transfer and the RISC OS firewall.

We cover the use of File Transfer Protocol (FTP) and LanManFS to access files stored on Windows, using Sunfish to read files from Linux over NFS and Moonfish to view RISC OS files on Linux. There’s consideration of how filetype mappings work on network filing systems, and details of how to configure the RISC OS Six firewall.

Here are some old back-issues of The WROCC, which can be downloaded in PDF format to give an idea of what the newsletter is about. More recent issues are available to members at the top of the page.

The files can be viewed on RISC OS using PDF, which is maintained by Chris Gransden: recent versions (3.00.1.21 or later is required to view the newsletter correctly) can be downloaded for free from www.riscos.info/index.php/PDF. 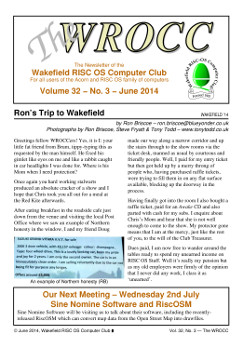 In the June 2014 issue, the newsletter carried a report of the 2014 Wakefield Show and details of what RISC OS Open had to say at the event. There was a report of the May meeting, where several members looked at interfacing things to a Raspberry Pi, a review of Sine Nomine Software’s RiscOSM mapping software and a guide to changing the iconbar icons used by Uniprint. 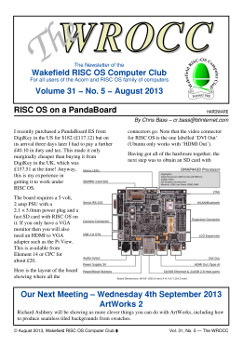 Alongside a report on the new risc/pi website, the August 2013 issue of the newsletter reported on the July Meeting’s talks including the options for printing from RISC OS and Peter Richmond’s experiences using RISC OS on the Raspberry Pi. There was also a guide to getting RISC OS up and running on a Pandaboard. 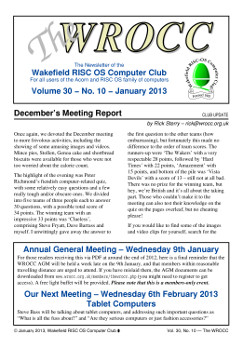 The January 2013 issue of the newsletter contained a report of the December meeting and included the Christmas Quiz questions for readers to try out for themselves. We looked at the inside story of creating the Back Catalogue CDs, and had a preview of the 2013 Wakefield Show. Some of our members looked at using David Pilling’s SyncDiscs for scripting automatic backups and Snapper for taking screenshots. There was also a quick look at NetSurf’s early Javascript progress. 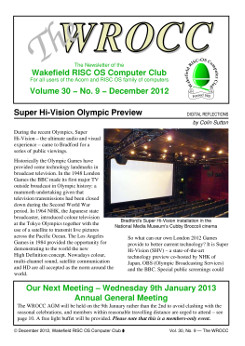 In December 2012 the newsletter reported on the previous month’s visit from Mike Cook, where he had demonstrated his RFID-based music sequencer, some Raspberry Pi-based hardware projects and the ‘Spoonduino’. In his final article, the late Colin Sutton described the Super Hi-Vision equipment used to bring the London Olympics to the big screen in Bradford, we took a look at an early version of RISC OS on the Raspberry Pi, and discussed what was required to connect a modern LCD monitor to a RiscPC.